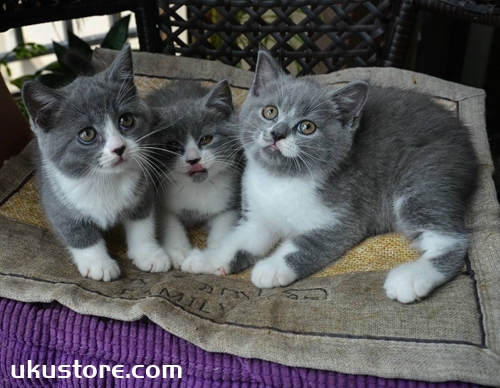 British Shorthair how care? British Shorthair coat is generally soft as velvet, thick, rarely fall off, easy to manage, but if you are a novice shovel feces officer, take care of them might still be a bit difficult.

Cat claw is a tool for cats, climbing and self-defense. If the owner catches the cat, it is certainly can’t trim the foot claws. If the owner of a cat as a companion animal, then it should always give the cat claws trimmed to avoid scratching people, catch the bad clothes, furniture, flooring and so on. The trimming mustache should start from a small, 1 month. The specific method is as follows:

The cat in his arms, grabbed a cat’s foot with his left hand, with the thumb, index finger, middle finger a little squeeze, would enable the claws out. Then use the right hand holding the nail knife, carefully cut the transparent portion of the front end of the claw, and then use the small claw on the nail knife. When pruning, do not cut too much, so as not to hurt the cat’s feet. Cut the other claws in turn, polish.

Not only can keep the cat a bath to clean, beautiful, bathing can also remove some of the surface of the parasite, promote blood circulation and metabolism, play a role in disease prevention and fitness. Bathing habits, it is best to start training from an early age, before adulthood began to bathe the cat, the cat will reluctantly.

Bath before the bath should be ready appliances, such as bath tub, bath detergents, comb (preferably a hydrophobic, a secret), brush or the like.

Bath water temperature should not be too low, not too high, not hot is appropriate; irritant detergent used is not too large, so as not to irritate the skin; British Shorthair to-back hair should be combed before taking a bath, to prevent tangle; bath We must act quickly, as far as possible in a short time washing; after washing, immediately with a towel to dry the hair, when the temperature is low, it is best to cover special warm towels or other supplies to prevent the common cold.

British Shorthair tongue rough, with a special barbed tongue papillae, like a comb, British Shorthair frequently to sort out the hair with a method tongue licking. Licking less parts, such as head, shoulders, back, neck and the like claws to comb. Even so, it is best to give the cat once every day. Because the cat hair removal throughout the year will be, especially in spring and autumn molting season, the cat will sort out their own hair swallowed in the stomach, forming hairballs in the stomach over time, if not by vomiting spit, but not in a timely manner through the gut Road discharge, retention in the stomach, it will form a hairball blockage, affecting appetite, and even life-threatening.

When combing, not only to smooth hair combed, but also against hair comb. British Shorthair in combing, wet hair can first with water, then rub the hair erected, easy to comb. British Shorthair coat entangled or bonded together, such as may occur open processing fingertips, dilute or comb teeth, combing slowly and carefully. As already felting, scissors, along the direction of hair growth, the mat is cut into thin strips, then comb. If felting serious, it can be pruned back hair, so regrowth.

The method is: 75% of the external auditory canal alcohol swab, then the swab dipped edible vegetable oil or olive oil, wax infiltration dry, wait until the softening earwax carefully removed with tweezers, do not touch the ear canal mucosa broken, to prevent infection fester. Once the cat’s external audio is infected, it can be easily scrubbed by the cotton swabs and the hydrogen peroxide, repeatedly scrubbing the cotton rod does not stick to the proliferation, and then use skim cotton to take the oxygen in the ear canal. Wash several times, infection can be healed. If the cat’s ear wad is too much, the cat shook his head and should be invited to treat the veterinary treatment.